What's with those weird self-published covers you see on Kindle anyway? And other burning questions about new developments in the book industry. 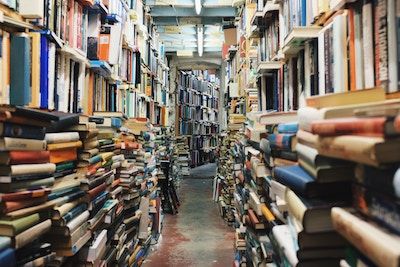 Most readers are vaguely aware of the changing tides and competing interests in the book business. You might make a special effort to shop at your local store, or maybe you say to yourself, “why buy when my taxes help support the best public institution society ever invented? F-yeah libraries!”

But whether you’re a diehard library patron, Kindle convert, or audiobook evangelist changes in the book industry have ripple effects that influence our passion, that thing we love the most, our escape, our empathy engine, our mind expander, social lubricant, etc…. Reading: it’s OUR THING.

And ultimately the business machinations influence where, when, how, and what we read. Here’s a breakdown of some of the latest news and trends we’re tracking in the book business landscape -- and what it means for readers.

Amazon Has A Variety of Issues Related to Authenticity

Article: The Amazon Publishing Juggernaut: What does the e-commerce giant want with the notoriously fickle world of publishing? To own your every reading decision. The Atlantic

Prime subscribers are so valuable to Amazon because they spend more in the long run: Jeff Bezos has said that people who stream videos on Amazon convert from free trials and renew their Prime subscriptions at higher rates than those who don’t.

Bottom Line: A unit of couches, a unit of books, to Amazon it doesn’t matter. And you can expect to see more, um…. let’s go with “amateur” book covers and self-published titles when scrolling through Kindle. Is that the best experience for readers looking for quality?

Then Amazon blew the doors off the heavily curated literary world. No longer was access to the marketplace determined by publishers, booksellers or reviewers. Even the most marginal books were suddenly available to everyone everywhere.

Breaking down the doors, however, also let in people who did not appear to care about the quality of what they sell.“Once a week a counterfeit pops up,” said Bill Hamilton, the agent for the Orwell estate. “When will a company like Amazon take responsibility for the curation of the products passing through their hands?”

Publishers are taking issue with Audible’s new Captions feature, first unveiled last month and set to go live in September through partnerships with US public schools. The feature uses machine learning to transcribe spoken words into written ones, so users can read along while they listen to an audiobook. The issue, however, is that Audible is doing this based on audiobook recordings, which have separate licenses to physical books and ebooks. The company is not apparently obtaining the necessary licenses to reproduce the written versions of these works.

Bottom line: According to the publishers and the Authors Guild this new technology feature developed by Audible is "quintessential copyright violation" which would ultimately devalue author's work and eat into profits rightfully due to authors and publishers.

Corporate chains were once a threat to smaller stores, but entrepreneurs have found ways to thrive, including hosting events and adding nonbook merchandise like games and T-shirts. The American Booksellers Association, a trade group for independent bookstores, has grown to 1,887 members with 2,524 locations as of May 15, the highest participation since at least 2009, when there were about 1,650 indie bookstores, the group said.

“As more people spend more time online, they are looking for deeper ways to spend time with the community,” said Ryan Raffaelli, a Harvard Business School assistant professor who has studied indie bookstores’ reinvention. “Independent bookstores have become anchors of authenticity. This is almost like a social movement.”

Bottom Line: Independent bookstores are on the rise - which is good! But trouble remains. They have very little pricing power to change the price of printed books. Which means selling books in a physical brick and mortar location on its own is simply not that profitable. More stores are relying on selling other merchandise like tshirts, mugs, cafe drinks etc.. to make up the difference. And even still, profit margins remain so tight that an unexpected rent increase can put a store out of business even with strong sales.

The value book stores provide is resonating with consumers, and yet the physical brick and mortar locations are eating up all the profits. The ABA says the top percent of successful retailers only make 8% margin. This got us thinking about how killer it would be to create a fully online model of the indie bookstore. Like, what if, instead of rent, those funds were invested into digital tools for the modern reader??

“Independent bookstores act as community anchors,” the American Booksellers Association declares, at the bottom of every page on their site; “they serve a unique role in promoting the open exchange of ideas, enriching the cultural life of communities, and creating economically vibrant neighborhoods.”

This same lofty idealism justifies why booksellers don’t need to be paid a living wage, like employees of nonprofits or teachers: because bookstores are so vital for the community, the assumption goes, the job should be reward enough itself. The work is so important that maybe booksellers should make personal sacrifices, working well below the value of their labor.

Bottom line: The business model of most bookstores depends on paying fairly low wages to skilled workers who are there for their love of books. Is that a sustainable business model?

"His guiding assumption is that the only point of a bookstore is to provide a rich experience in contrast to a quick online transaction." Because if a store is charming and addictive enough, goes Mr. Daunt’s theory, buying a book there isn’t just more pleasant. The book itself is better than the same book bought online.

It just is,” he said. “You’ll enjoy it more. You’ll read it quicker. You chose it with your own eyes, your hands, your ears. Now it’s all about anticipation. If you buy a book from Amazon, there’s a little anticipation as you rip the tag off the envelope. But it’s generally slightly flat and disappointing.”

Bottom line: As Chief Executive of Waterstone's - Britain's largest bookstore chain, Daunt has fought for and maintained a 25% market share compared to Amazon's 40%. Now he's on the hook to claw back B&N's U.S. share from 8% with the same magic recipe: location independence, personalized authenticity, a vision of the long game.

One Problem with eBooks, You Don’t Actually Own It

Microsoft will be closing its e-book library and erasing all content purchased through the Microsoft e-bookstore from devices. Consumers will receive a refund for every e-book bought.

The company is able to shutter its store – which it launched in 2017 to compete with industry leaders Amazon, Apple and Barnes & Noble – due to a tool called Digital Rights Management or DRM.

Bottom Line: Readers are often misled when they click the "Buy Now" button, thinking that they've gained permanent ownership of digital content. But when it comes to digital, you just simply don't "own it" in the same way as physical media.